I wanted to clear my Cloudflare cache during an Azure Pipeline deployment. Cloudflare offers a REST API to do this, but rather than poke around with scripts I decided to see how I could instead write a custom task to do this and publish it on the Visual Studio market place.

The extension is free on Visual Studio Marketplace and it’s open source on github. Here’s a screenshot of how it looks in a Azure DevOps: 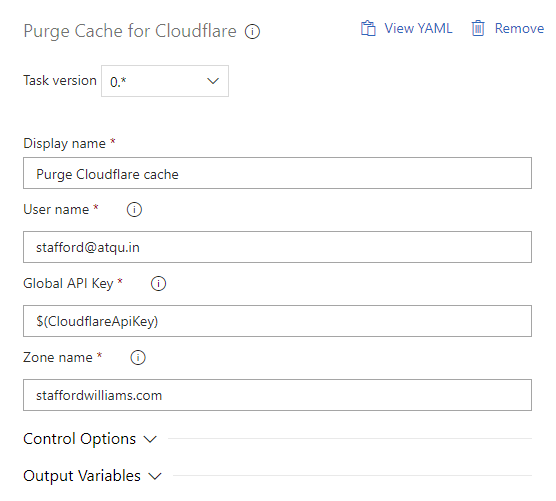 How I built it

I followed a great walk-through on docs.microsoft. I like that the instructions promote typescript and testing, though I’m not going to write tests for such a small task.

Another netizen already pointed out that I would need to query first the Cloudflare REST API to translate a zone name into a zone id, and then request the purge. I turned those instructions into typescript, compiled to javascript, and bundled this javascript as a vsix extensiion using tfx-cli.

Over all the code is very simple. The structure is as follows:

If we were just using javascript with no dependencies, that would be it. However we’re using typescript so we also have;

Once this is in place I packaged the extension with:

Publishing was a little odd - to publish publicly your Visual Studio Marketplace account needs to be approved as a publisher by someone at Microsoft. This was accomplished by entering some details about who I was and clicking a Request Approval (or similar) button. I got an approval and a you’re now approved email from someone at Microsoft about two days later.

Prior to being approved, the marketplace will block the uploading of any extension that has public:true set. Post-approval the uploader pointed out I need to include an overview.md on a public extension. However, you can point content/details in your vss-extension.json at, say, README.md to resolve this issue:

Overall it was pretty simple to execute custom code within an Azure Pipeline release and package it into an extension. From here I’d like to look into how such a task can be called by an Azure Pipeline yaml build, and, to auto-deploy updates to this task to the marketplace on commit - a colleague of mine has a post on this.